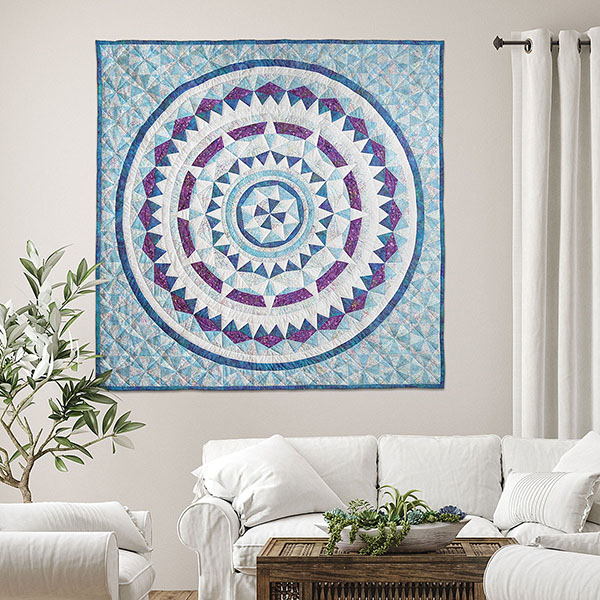 Unusual use of the kaleidoscope pattern

My admiration for large sewing projects and my longtime love of patchwork was at the beginning of this quilt. Until now, however, I didn't quite have the ideal working conditions or the determination to undertake such a large project.

Motivation always flooded me when I visited a patchwork exhibition in Prague. There was a lot to see and I was especially attracted to the combined creative techniques. I was most fascinated by the textile pictures with realistic scenes, classical patchwork I found technically too simple. But when I was standing in front of a large quilt, I saw an amazing number of hours of monotonously precise work, and I admired endlessly the perseverance and patience with which such a work was created. Most of all, I doubted that I could do it too.

I found the themed competitions especially interesting. It was enjoyable and very enriching to see how different authors creatively created their themes. For several years I have found in the announced themes a nice inspiration and source of education.

The idea of having my own big quilt was exciting for me, and it was only a matter of time before I too would take up the challenge. Eventually I found the right motivation in the themes of the competition categories and this year I finished my first big quilt. It is 165 x 165 cm, dominated by turquoise, and since my main concern was to finish the work, I was not very creative and the motif is based almost exclusively on the pattern of an eight-part square kaleidoscope pattern.

Although I've become familiar with various types of patchwork blocks over the years, I hadn't sewn a kaleidoscope before and it was new to me. So I studied this pattern and started designing. I knew from the beginning that I wouldn't follow the beaten path and I would try to take an unconventional concept of the kaleidoscope. Uh, uh, a simple square block, so I'm going in a circle. I love the shape of the mandala, and although a more appropriate pattern could be found for the circular shape, I adapted the kaleidoscope block for it. I kept the eight-part kaleidoscope in the center and I assembled the outer circles from the eight-part blocks into a twelve-part mandala. I had to skew the block at a different angle in each circle to make the wheel come out while keeping the pieces approximately the same size. In order to sew really accurately, I made the whole design on the computer first. From there, I could then print out templates of arcs and skewed kaleidoscopes to make large flat circles with no ripples.

Here's a preview of my initial design and the design when I added the actual patterns of the selected fabrics. I considered such preparations to be very important. If I'm going to sew it for „a whole year”, I don't want to end up being surprised that it doesn't look like it did in my head or even decide halfway through the work that it would have been better otherwise. I didn't want to risk getting into a situation where I would be laboriously stitching several thick layers and the whole works would be too heavy and hard to handle, because I don't have that experience yet. So I was looking for a very lightweight fabric where I was mainly concerned with the colour of the motif. I was impressed by the fine batiked Bali poplin, which I found in a wide range of colours and small motifs and was able to combine it exactly to my liking.

To assemble the first few circles went still on my table. After that, I just relied on templates. I did a lot of ironing and kept checking to see if the result was wavy. I completed the corners of the mandala background with a classic square kaleidoscope, and carefully sewed the circle also according to the template. I was satisfied. When I set down the furniture in my workroom, the whole motif fit on the floor, so I had a chance to finish it. I had to stitch the sandwich from the centre, so after each stitching of the circle, the quilt went back down to the carpet to smooth and re-pin the fabric on the back. 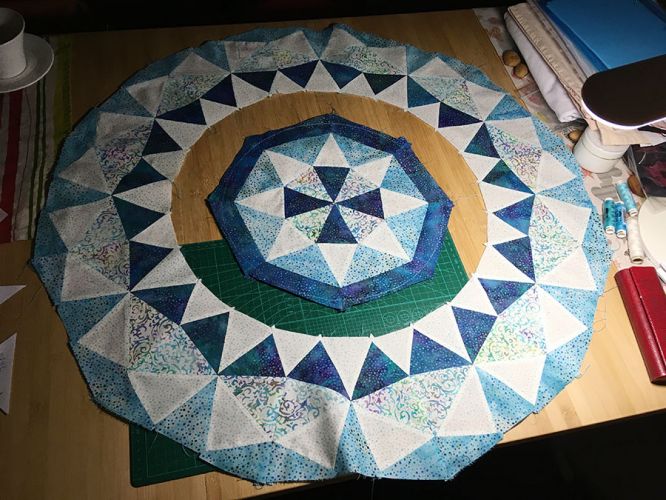 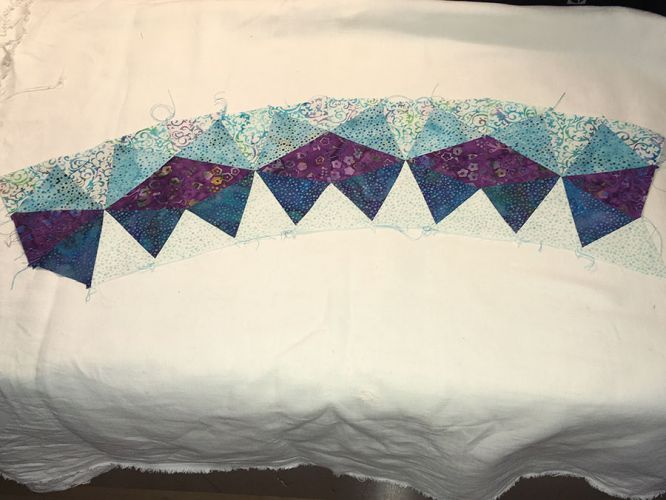 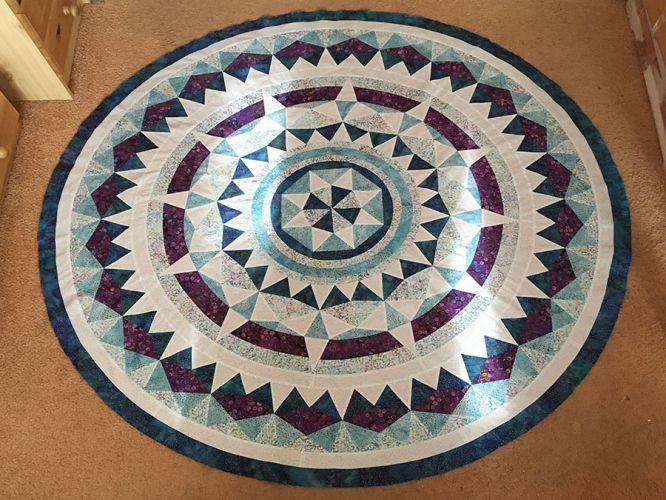 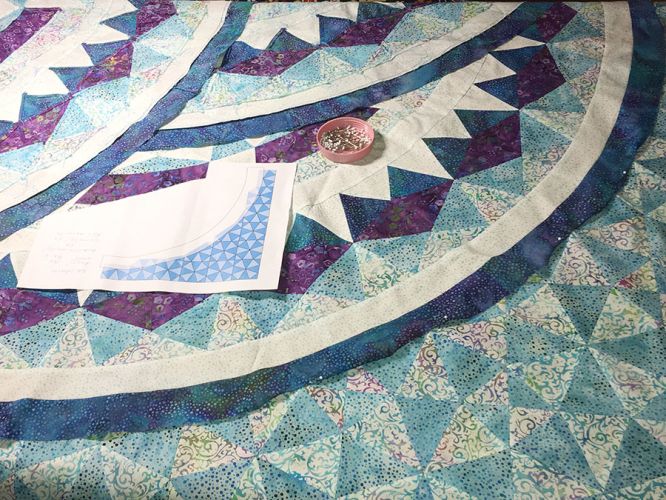 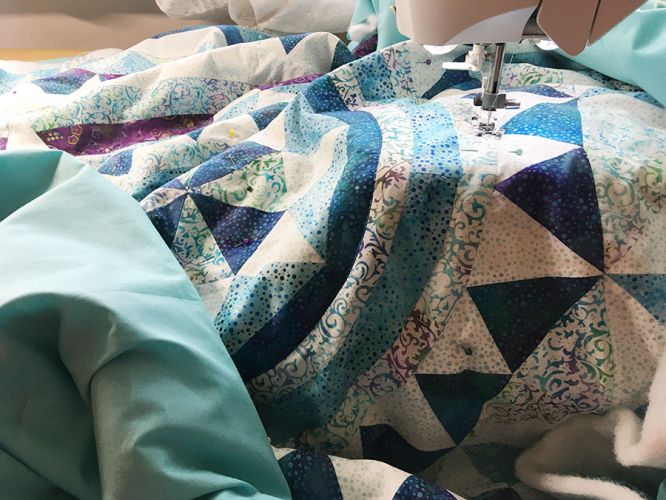 I was very looking forward to start quilting the ornaments. My machine has quilting functions and I love using it for smaller things. But I found out very quickly that I didn't have the right conditions for it. Without an additional top table to the machine or without the machine built into the table, I am not able to move such a large item around comfortably to quilt freely.I did try to make the quilting to my liking, but it was frustrating work, I couldn't get it done fast enough to finish in time, and I ended up removing the failed embroidery pieces.

Where does the cat keep coming from?

Obviously, my cat also loves circles. How else do you explain that as soon as you turn around, she's sitting right in the middle. Even though I sewed the mandala from the beginning, it eventually renamed itself.
„What are you sewing? Is that a carousel?”, Ríša asked when he saw the first circle on my table. He persistently called it a carousel after that, though I always corrected him.

When I got to the point of putting the furniture away, I went to him and I said.: „Come see your carousel.”
And we went. The cat's lying in the middle, stretching her paws. „Hey, it's a cat carousel,” he's talking and it stayed that way, it was magical.
Immediately an image appeared in my mind of crazy cats having fun at the fair on a big chain carousel. I made it and added it to the backside in the signature. Now the quilt will go on show. It's okay that no one will see the picture there. I know my cats are there, and that's good enough for me. 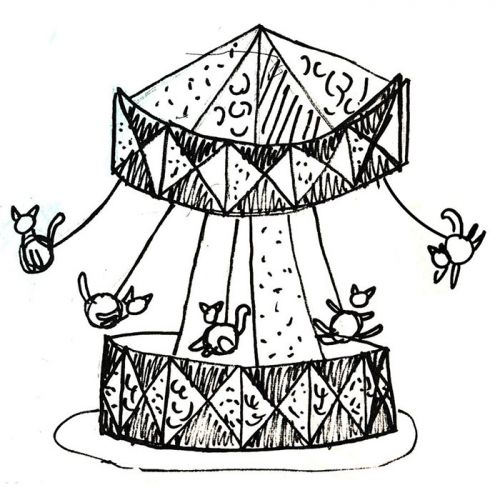 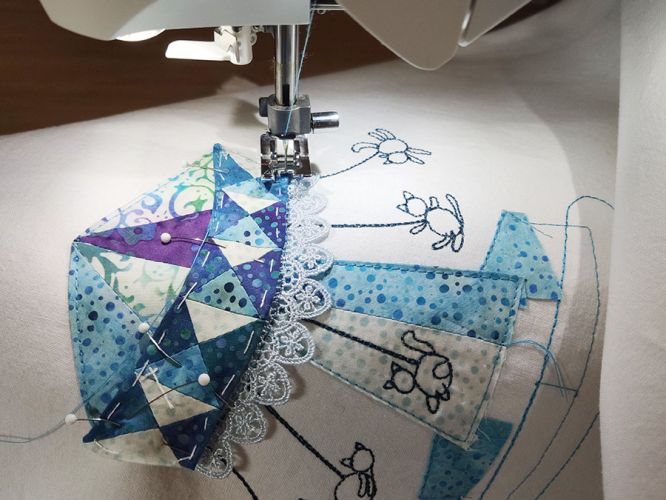 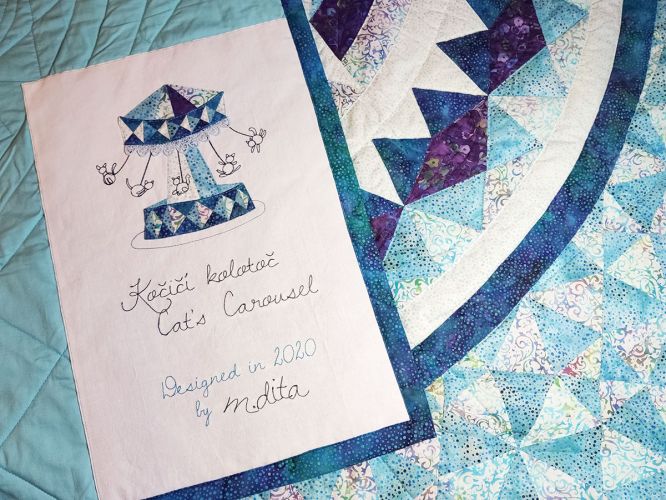 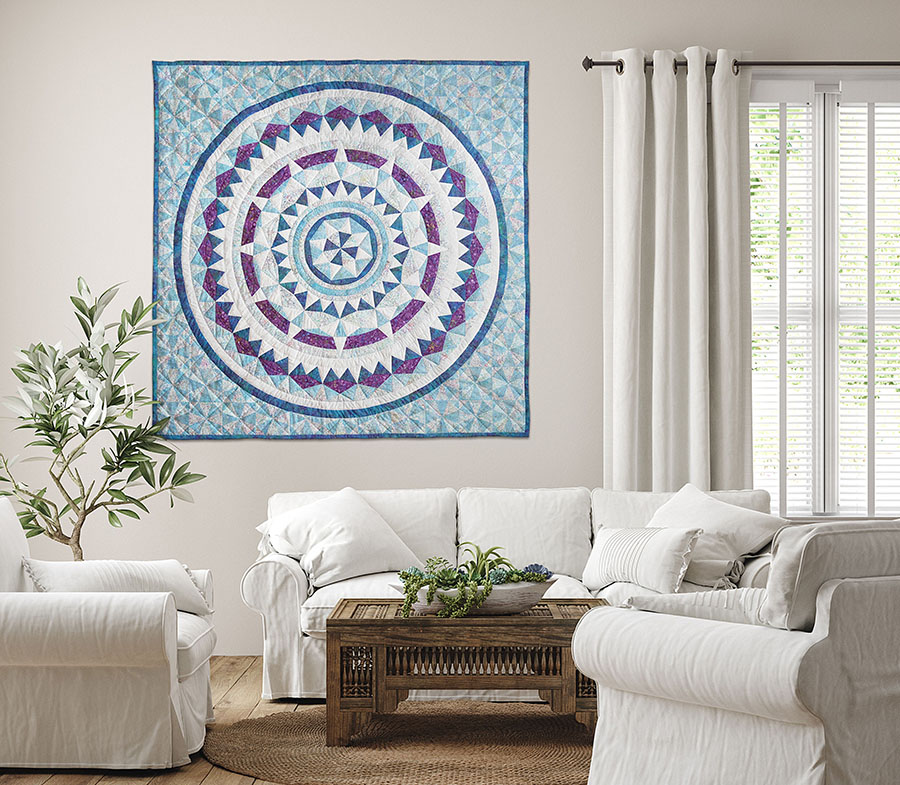