Kaleidoscope a second time in another way

I stayed true to the kaleidoscope pattern on my next quilt. This pattern is very inspiring to me and I just wanted to realize something consequential.

I consider the kaleidoscope motif of repeating the same pattern to be the true kaleidoscope. It's such a fascinating process, where you cut one specific pattern and create another, abstract one. At first I was cold to this technique, but then I discovered the "one block wonder" of the fabric panel. What emerges is a motif that no longer says anything specific, it just evokes feelings. The randomly, almost unintentionally creative result of this technique is much closer to my vision of the world than the classic patchwork quilt of geometric patterns. I am most impressed by artworks where you can't see what the original motif looked like because it doesn't appear on the quilt, it raised my curiosity and that's start of my need to create something like that as well.

Just sew it up

But my initial enthusiasm faded when I couldn't find a suitable panel that would impress me. I wasn't looking for any painting, as it wasn't meant to be the central motif, I was just looking for a large structured motif that would make something new and evocative. Finally, I stopped worrying about it, I told myself I would just try and see, as long as I didn't complicate it in any way so I could finish it.

I chose a decorative canvas printed with a motif that I was comfortable with in colour and complemented it with single colours with the same texture. Although the decorative canvas is a higher weight, the motifs on it are usually larger, which suited me exactly. I choose the motif of painted roses and viburnum, which I love. I never turn up my nose at vintage motifs, this one caught my eye at first sight, it was fresh and modern. It was big enough, the motif was repeated over 70 cm.

Careful preparation is my hobby

I was a bit inhibited by the idea that I would have to cut the motif and then try and combine it in the best way. I had decided in advance that it would be a cover over the bed, so it had to be at least 150 x 200 cm.

I am very glad that I did not underestimate the preparation. I have revised my design many times. I photographed the motif, carefully measured and planned everything, and ended up with 60 six-part kaleidoscopes. But it was still not enough to get to the size I wanted, so I had to add more blocks. I figured I would stitch the 12 blocks I was missing with the same motif of rose and viburnum fragments.

Selected fabrics and samples from my graphic design:
Cutting into pieces, diagram of number of blocks to size, stack of motifs, embroidery design and part of the final design. 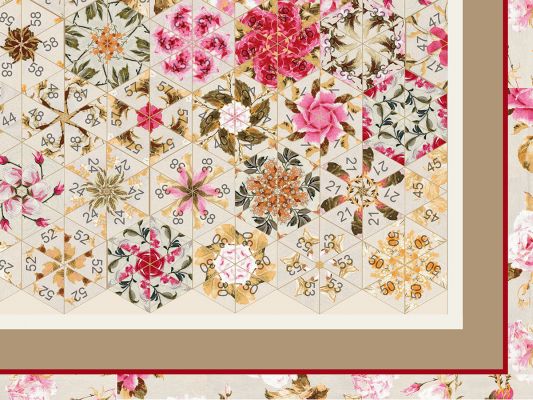 From design to realisation

It was supposed to be an uncomplicated quilt, but the realization of the embroidered blocks was very time consuming. Eventually I worked out a style matching the embroidered motifs and included them in the design. I wanted to avoid having to change the design later, so from the beginning each block had its place. Finally, I cut and numbered everything and continued working from my paper design. Following my numbered instructions made it super easy and convenient. 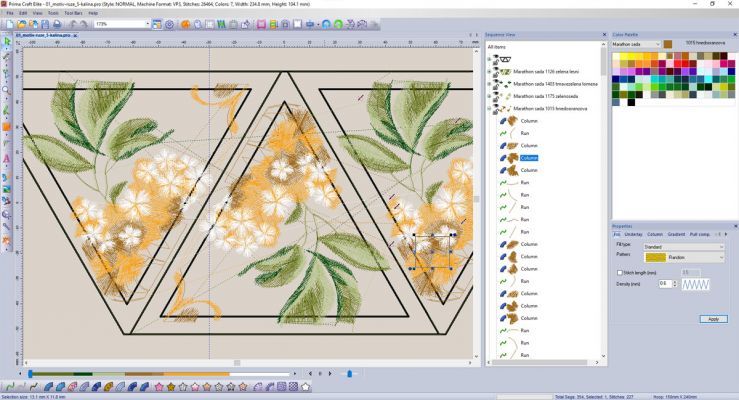 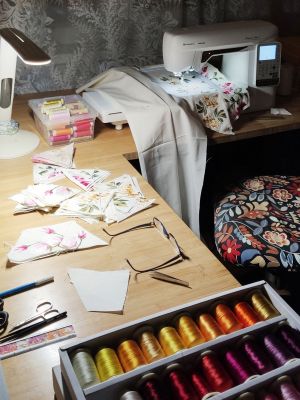 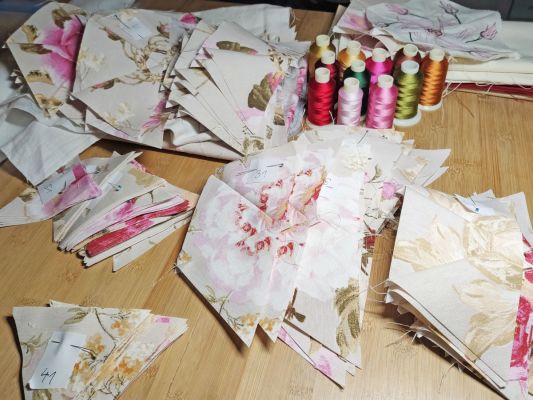 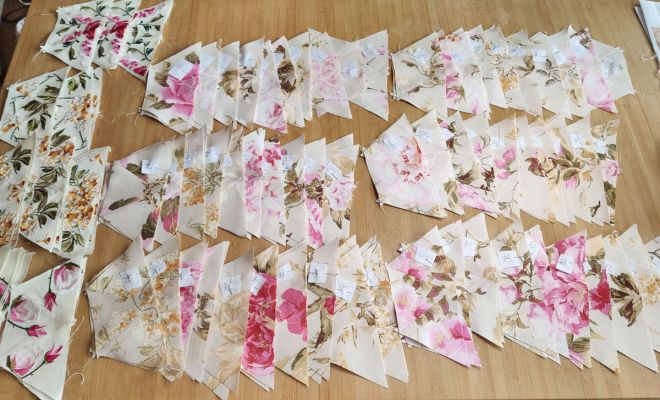 I finished the face of the quilt by sewing on the borders in the proportions exactly as I designed them. I also made the rest of the border with the original motif. Here I wanted to keep the fragments so that I wouldn't show the whole large motif, which, in my opinion, just doesn't belong on a quilt of this type.

I had to move the furniture to assemble the sandwich, luckily it fit on the floor. I chose a soft pink color for the back. I only quilted with a straight stitch. I didn't attempt to quilt any arches or ornaments this time. The whole quilt was very large and heavy. It was very difficult to move around on my smaller table and getting it into the machine, which I don't have a top table for, was very problematic. I'll have to solve this problem of fitting the sewing machine into the table top somehow before my next big quilt, because I really want to quilt. 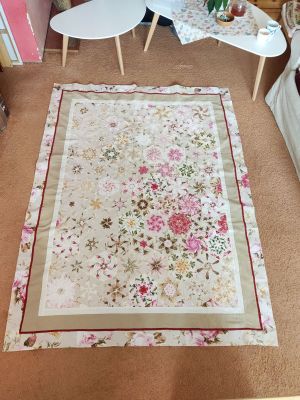 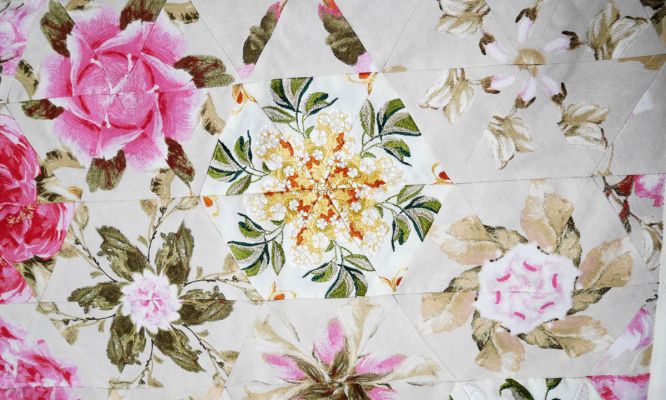 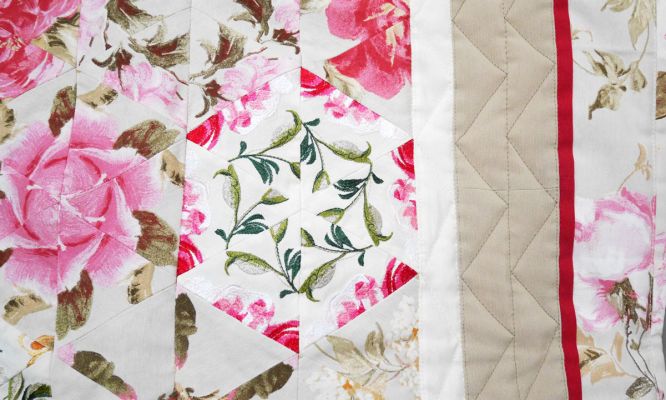 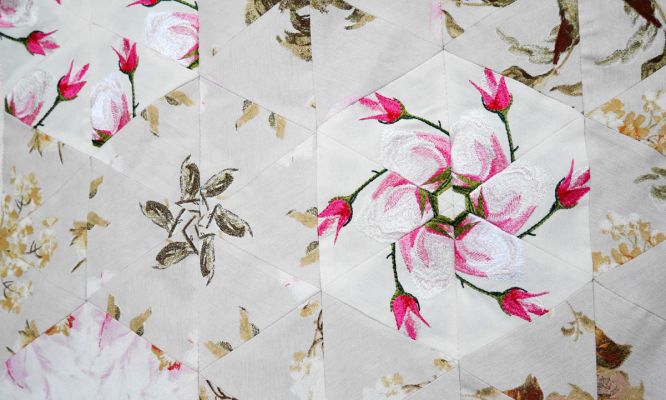 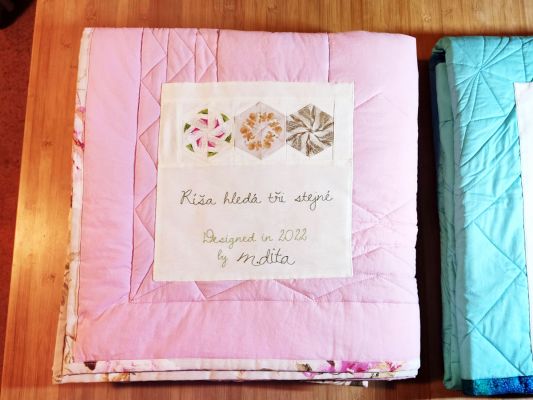 It has to be called something

I didn't call this work anything from the beginning. It was just a „one block wonder” quilt and I had no bigger ambitions for it. I feel that the embroidered blocks are the only significant and noticeable feature of this design. I created a thumbnail illustration of the three blocks for the signature on the back, and only then did I begin to think about what name I would give this quilt. I was looking at the finished quilt and rubbing my chin when Ríša came in: „What's it going to be called?”
I didn't know exactly, but I had a certain intention.

„Find three of the same,” I tell him.
And so Ríša was looking and also rubbing his chin and mumbling something:
„Hm, I don't think they're next to each other... these are just two... maybe some of those embroidered flowers...”
I couldn't wait any longer, I needed to finish, so Ríša is still looking for three of the same.

„And are they even there?” he asked, as I was getting ready to embroider the headline.
Yes they are, Ríša, they are there. He finally found them, and you can try too.