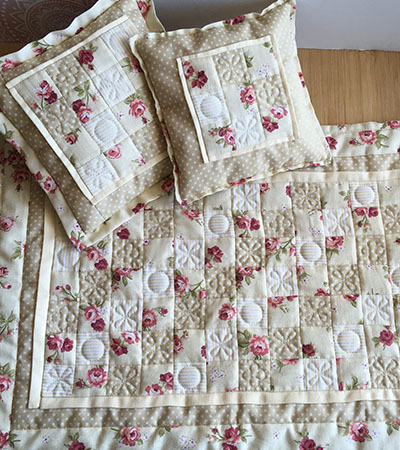 Great fun activity for many evenings or: „I'll probably never finish it...!”

Classic patchwork, this is a textile technique for lovers of traditional handicrafts. This is fun for a long time, it is not particularly difficult so you can relax well with it.

Quilting and patchwork I do not really care about, but I find this technique amazing. Some project I will start when I want to relax, but it's never great. To sew for half a year, that's work for really persistent and patient seamstresses.

I met the patchwork somewhat late, during maternity leave. Ma friend Katerina, also at maternit leave, was engaged in it and I had the opportunity to get to know one of her projects from start to finish. Just we sat in the garden, and the children rattled in the pool, for the first time she showed me the star layout, then she went into the house and brought a pile of cloth. During the other mother tea parties, I saw cut pieces and elaborate squares piled in stacks. One glorious day, sometime before Christmas, she took me proudly into the bedroom, and for the first time, I saw a huge quilt over the king size bed.

An absolute amazement was my first reaction. Wuau, my God, so much work and so disappointing result? Not only that her color and pattern combinations were boring, but the quares did not fit properly, she has not even attempted decorative stitching. This bedspread was very far from what I knew from my grandmother's magazines.

Despite this fact Katerina got my unconditional respect and admiration. Literally I was ashamed of her patience and the effort to successfully complete such a big project. It was the initial impulse to try some patchwork too. But because I was not crazy, and it was clear to me that such a huge quilt like Katerina did, I would never sew, I made only a few pillows to my parent's bedroom and the bag for my sister-in-law, which she then wore to work. But I fell in love with the patchwork technique and sometimes I just take a pillow again because I enjoy it.

For dolls it's always and everything smaller

This quilt for a doll is a miniature of big quilt in a 1 : 4 scale. I added two pillows. A miniature quilt on a doll's scale is smaller, but it takes as much time as a big quilt. The only one advantage is that it fit on the table and into the sewing machine and in process into the box. The material is, of course, a cotton and it is not a very creative project. The pattern is just squares with stitching and I also I chose the proven colorfulness and combination of patterns, roses, dots and strips in a pink and beige scale, evoking a popular romantic vintage style. 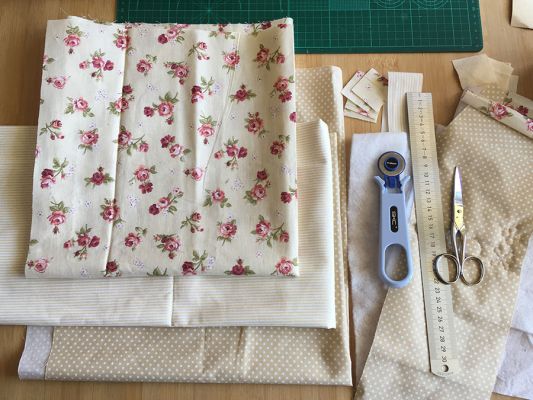 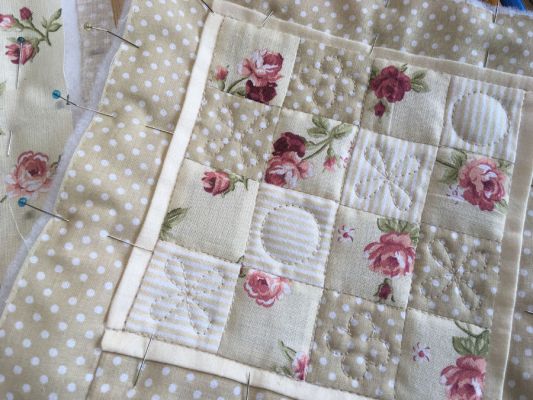 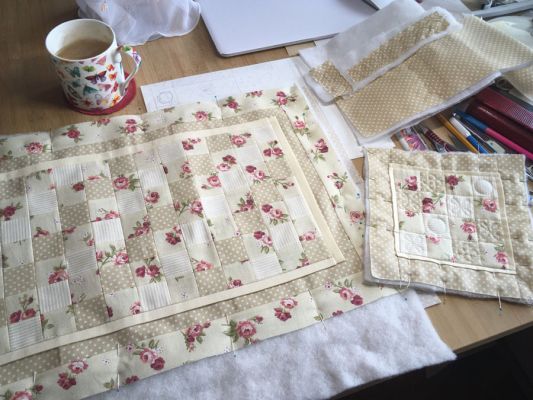 The squares have a size of 3 x 3 cm and edges 1 cm. I worked precisely because miniaturization would make a lot of visible mistakes. I had to correct some defects, i.e to unstitch and to re-stitch. I only solved the thickness of seams in some places where more fabrics met. The seam allowance additions are carefully and sophisticated cut out inside and the ends of the seams are well finished, so that the seams are not broken later. Stitching squares with a small 2 x 2 cm ornament is done by machine embroidery, which is more accurate than I could create by free quilting. I quit another quilting because the quilt would stiffen. Finally, the quilt is washed and softened so that its behavior is model-flowing. 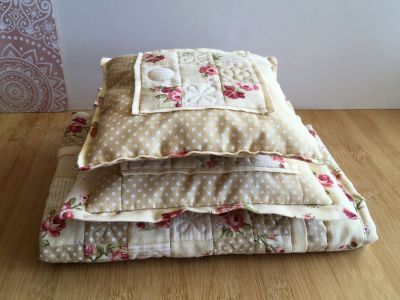 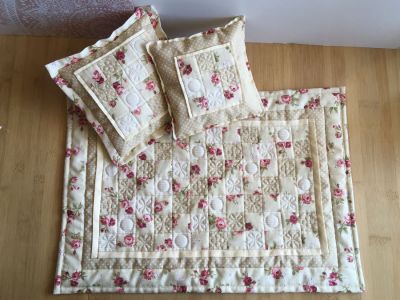 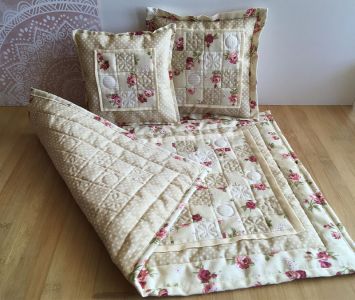 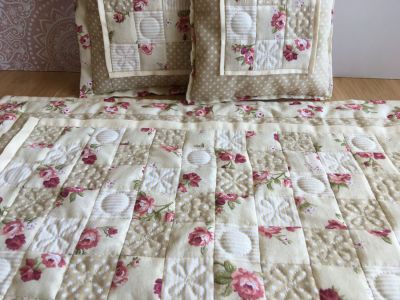 Quilt with pillows is for the doll, so in the end I have to add a few photos with a doll for the scale presentation. Mesmerizing Ysla is a fashion doll Urban Vita, which the producer Horsman designated as "The world's most poseable collector's doll". Because I wanted to show her the possibilities, I took the liberty to arrange and take pictures naked. 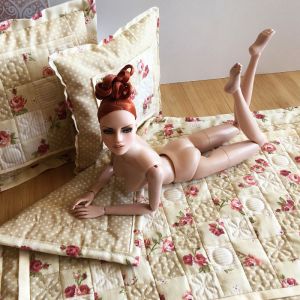 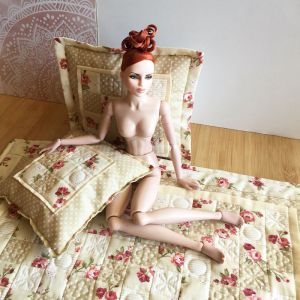